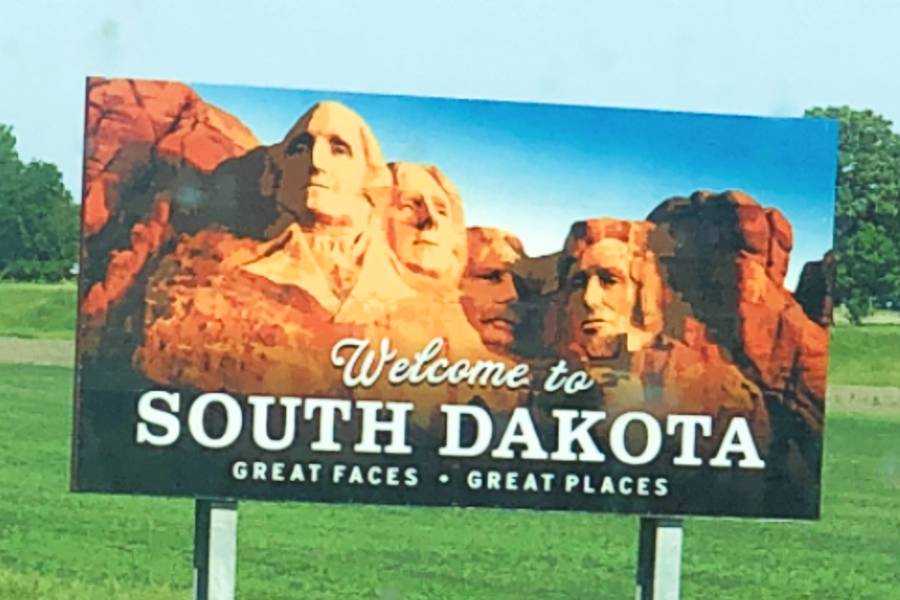 Our RV trip through South Dakota was a fun experience! We were amazed at the landscapes, learned about the Native People, and marveled at the number of animals roaming free in the parks. Read on as we share some of the fun things to see and do while RVing in South Dakota!

Traveling west through South Dakota here are some great stops along the way.

Our first stop in South Dakota as we headed west was just outside Sioux Falls. Since it is the biggest city in South Dakota it is considered one of the must-see cities in the Midwest. Pretty much anything you need can be found here.

Sioux Falls offers a surprising variety of food choices. Not just the midwestern type of foods you might think of like butter and cheese and corn. They have French bakeries that specialize in macarons, outstanding Japanese food, and the M.B. Haskett Delicatessen owned by a graduate of the Culinary Institute of America.

In downtown Sioux Falls there is a full-size statue of David that is one of only two bronze castings ever made from the original! It’s 18 feet tall and is in the Big Sioux River in Fawick Park.

There are 5 ancient burial mounds in the center of the city! Testing has shown the remains of Woodland Indians were buried there over 1,600 years ago. The Park is located at 2705 W. 12th Street in Sioux Falls.

One of the most famous attractions in Sioux Falls is Falls Park. The Park is 128 acres offering many different viewing platforms to watch the amazing 7,400 gallons of water drop 100 feet each second!

With over 800 free-flying butterflies and South Dakota’s only saltwater aquarium, this is a unique stop on your tour of Sioux Falls.

The World’s Only Corn Palace

Who knew there was a Corn Palace?! Well, there is one and this one is just outside Mitchell, South Dakota and claims to be a premier tourist attraction. According to their website, 500,000 tourists visit here every year! Unbelievably it was established over 100 years ago to prove that South Dakota has a healthy agricultural climate. It has continued to grow and hosts festivals, concerts, sports events, and shows. The most interesting thing is that each year they choose a different theme and the Palace is completely redecorated with murals of naturally colored corn and grasses native to the area demonstrate the “agricultural show-place of the world”.  If you are in the area during the end of August, this is certainly an entertaining side trip!

Dignity: Of Earth and Sky Statute

Don’t miss taking the exit for the rest stop between exits 263 and 265 on Interstate 90 near Chamberlain. You will be rewarded with seeing the magnificent 50-foot-tall statue honoring the cultures of Lakota and Dakota people overlooking the Missouri River.

During the day the diamonds in her quilt reflect the sunlight and at night she is illuminated. We accidentally stumbled on this incredible work of art, make sure to stop and see it yourself and take in the views!

Dignity: Of Earth and Sky

Want to know more about great RV destinations and sights in South Dakota? Follow along as we continue to share our RV journey out west!

Carol is a long time adventurer who loves travelling in her 44 foot Newmar Mountain Aire Class A RV with her husband Mike, and their Black Standard Schnauzer aptly named "Rider". Carol has been sharing travel stories and advice for years, and their newest adventure chronicles what luxury RV living and travel is all about. Tips, tricks and lessons learned about Glamping- seeing the country in style and comfort while cruising behind the wheel of a luxury RV. They definitely know how to RV-N-Style.

link to 10 Tips For RVing At High Altitudes

We’re traveling across the country this year and are getting tips from fellow RV’ers. We’ll share those tips and tricks as we travel. This post is about RVing at high altitudes. RV Sleep...

RV Stories From The Road Series- West Coast In our RV trip across the West Coast, we made several stops in Wyoming. In our final stop on the western side of Wyoming, we stayed at a park just...

RV-N-Style is a website dedicated to answering questions and providing information that is specific to the luxury-minded RV’er. We focus on the finest RV Resorts, experiences and products that are related to luxury RV owners.

All opinions are our own and we only link to products and companies that we use and recommend. Some affiliate links (like Amazon) are only valid for 24 hours. If you want to support us by using our links, please use these links when you are ready to make your purchase. Thanks and Travel Often!!

This site is owned and operated by DPSI, LLC. RVNStyle.com is a participant in the Amazon Services LLC Associates Program, an affiliate advertising program designed to provide a means for sites to earn advertising fees by advertising and linking to Amazon.com. This site also participates in other affiliate programs and is compensated for referring traffic and business to these companies.

Get Our Latest Posts Sent To Your Inbox